For the first day of filming of the artist portrait, we went to visit Kristian’s childhood home. Over 40 minutes from Kongsberg, the nearest ‘city’, into the mountains lies Lyngdal. A small town of only 300 inhabitants and the childhood home of Kristian. His father Tor Einar Evju, also an artist, has built this extraordinary farm plank by plank. The construction started when Kristian was just a young child and still continues the day today.

After driving through Lyngdal ‘centre’, which took about 1 minute, we take a sharp left into Bergtun (farm). It’s a large timber house surrounded by small outhouses, a ‘stable’ and a huge purpose built studio, where Kristian’s father works. As the artist portrait was going to touch on Kristian’s childhood and reasons for becoming artist we thought this would be the perfect location.

We start the day with following Kristian around the farm with the cameras, getting an insight into the place where he grew up. The environment and surroundings that formed and influenced him as an artist. The stark contrasts from growing up in a remote mountain village in Norway compared to his life in London is as clear as the winter sky.

The thermometer on the barn wall is dipping close to -20c and we have to take brakes inside, both for the good of the crew and equipment. But we do not have a lot of time, as in the winter months, you only get 4 hours of daylight and we still want to film with the drone.

We learn that Kristian often spent day’s out in the mountains during the winter and the stark contrast between the white snow, dark trees and black mountain cliffs, is one of the things that is reflected in his pencil drawings, with large white spaces filled by sharp black pencil lines.

We want to capture this with the drone. So we drive further into the mountain to a place where a snow-covered lake hits steep cliffs and the tree line gets thinner. The -20c is causing trouble for the drone, the calibration takes longer than normal and the sensors are all off. It does not want to take off! 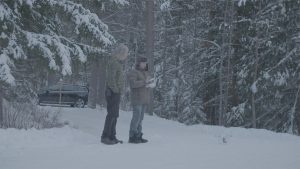 Having trouble getting the drone to take off.

With little daylight left, we try looking online to solve the problem. But using your phone at his temperatures is not nice either, taking your gloves off just for a few minutes instantly turns your fingers into ice. Stepping into a warm car is also not an option and the drone would start to condensate.

After a while, we get it to work and fly over the frozen landscape of the Norwegian mountains. We hurry back to the farm and get some drone shots there too before the sun sets at 2 pm.

Drone shot of the frozen lake in Lyngdal, Norway

As I got the film camera out to film some cutaways, I spot a ‘snow-mouse’ foraging under the bird feeder. This funny animal is actually not a mouse at all, but a white miniature ferret, I capture it on film. Win.

We end the day with an interview with Kristian infront of the fireplace. Listening to stories from his childhood and how he discovered he had a talent for drawing. As we listen to his stories the influence of Lyndal in his work becomes more obvious. A childhood without a tv, spending hours drawing with his father by the fire in the dark winter months and the freedom of living in a remote place like Lyngdal.

Kristian Evju by the fire talking about his childhood.

As I travel back to Kongsberg it becomes obvious how clear Kristian’s vision and determination to be an artist is. The weight behind the decision and thought given to come to the terms with living the life of an artist is remarkable.

The next day I meet Kristian in Kongsberg to film some portrait shots by the river, the sun is out and the unique light in a cold December day is great for filming. So we rush to get as many locations as we can, from Kongsberg to Lyngal as we wiz up the narrow mountain roads. We settle on a shot over Lyngdal as the sun disappears behind the mountains in the horizon. 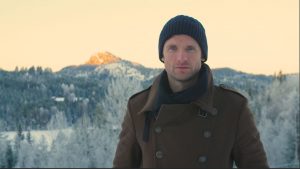 As I sit on the plane back to London, I find myself missing my home town and the mountains, where I once spent so much time growing up. I make peace with the …. knowing that I have managed to capture this on film for my Artist documentary with Kristian Evju.

If you are looking for an Artist Portrait for one of your artists then please do get in touch here or drop me an email Jonas@filmyardart.com

You can check our Kristian Evju’s amazing work here: http://www.kristianevju.com/

In this blog, I will share my experiences of starting a new company and working in the London Art Scene. Looking at everything from the struggles of getting new clientele to the successes of our clients.

HOW TO USE SOCIAL MEDIA FOR ART GALLERIES DOWNLOAD NOW